Province of Tanganyika More than $1 billion injected in Development Project

A strong delegation of South Korean investors based in the United States of America arrived this Sunday, April 1, 2018 in Kalemie, capital of the province of Tanganyika in the Democratic Republic of Congo. This mission, led by Mrs. K.J LEE, President of Global Trade and Finances, is part of the implementation of large development projects in the province of Tanganyika. These projects of a public-private partnership, according to ma-dame K.J LEE, are focused on agriculture, rural electrification, drinking water as well as the construction of infrastructures. Global investment cost: over 1 billion USD. The President of Global Trade and Finance who re-knows the potential that Tanganyika abounds with the will of these investors and bosses of large South Korean firms, intends to inject fresh capital and non-refundable in almost all sectors of life and start so all projects simultaneously.

Provincial Governor Richard NGOY KITANGALA welcomed the visit of Mrs. K.J LEE and all of her delegation, which marks the beginning of a new era in her jurisdiction with the foundation of job creation. This important delegation made this Monday, April 2, 2018, a trip to PK30 on the Nyunzu road west of the city of Kalemie. Objective: to get an idea of the grant of nearly 10km² granted by the provincial government: this site will leave the bridge Emili Ngombe nearthe village Amisi. It is here where a car and mining pool will be erected with an investment of 500 million and more than 1 million USD respectively. Social housing , a mining research center and some agricultural projects are also planned. Subsequently, accompanied by the provincial governor and some sectorial ministers, the delegation of K.J LEE visited the Jimbwe mining site more than 20 km southwest of the city of Kalemie. In this coltan artisanal career, the president of Global Trade and Finances promises to support the diggers. It is notably the endowment of industrial equipments for the increase of their production. 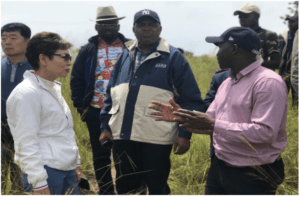 Kasambondo; from darkness to light

The Kasambondo village about 20 km east of Kalemie is the pilot phase of the rural electrification project carried out by the South Korean firm Architectural Metals Fabricator.

In this fishing camp, more than 6,000 inhabitants will benefit from electricity based on wind power coupled to the Voltaic. This first experience will allow 150 houses to be not only lit but also to use appliances. Thanks to the electricity the population of Kasambondo who lived only of the fishing will be able to diversify its sources of economy.