The project was presented to the Minister of Spatial Planning and Renovation of the city, Felix Kabange Numbi, by a Korean delegation led by the head of Global Trade Finance-USA-S.Korea Company, Mrs. K. S Lee. Félix Kabange Numbi, acting as the interim Minister of Urban Planning and Housing, received the Korean delegation in the presence of his colleague from the Development Cooperation, Jhon Kwet Mwan. Mrs. K. S Lee explained to the members of the government the merits of the project that she plans to launch in mid-January 2018 to provide the Congolese with a quality habitat of international standards. 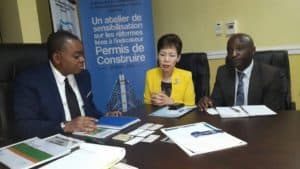 Regarding the guarantees that this Korean company has to guarantee the success of such an ambitious project, Ms. Lee explains: “My project is to provide a modern, serene and affordable housing. I want to give social housing to any Congolese. I do not have much to hang on the guarantees, I conceived the project, I presented it, a month ago, to the Minister of Urban Planning and Housing. I have all the means to materialize this project and I got along well with the Minister of Urban Planning and Housing to move on to the execution of this project. That’s my guarantee. “

While thanking the Minister for Regional Cooperation who made contact with the company of Ms. Lee, Felix Kabange Numbi said that his ministry and those of Urban Planning and Housing and Land Affairs will work together to materialize this project.

“The government will make available the construction sites. The first sites have been identified and two million houses are to be built in rural areas but also in cities; these are large spaces that will be planned. This will be done gradually, “he said, adding that” the government will intervene through the National Agency for Investment Promotion to provide investment and customs facilities to the Korean company. “

The government, promised Minister Kabange Numbi, will accompany Ms. Lee in the materialization of this project that will be in a public-private partnership. “This is not a commercial project but a social project in the true sense of the term that goes into the materialization of the project of the Head of State concerning the construction of modern villages,” he acknowledged.